You can save on average an additional $60 to $440 about half the time with Amex’s International Airline Program (IAP) discount.

Remember that Flash Airfares—which can change any time and probably will, generally within a day or two, more or less—can be extended, see FCF’s February report for details on Hold It Right There: How to Lock in Amazing Premium Flash Fares Long Enough to Decide If They’re Right for You.

For Travel Agents: If your travel agent or airline reservationist is having difficulty finding these fares, provide them the “Fare Basis Code(s)”, which they can use to pull up a “Fare List” in their computer, which will give them the fare’s “rules” to help navigate to the deal: American Airlines, I; United, P.

Screenshot of sample fare on united.com: 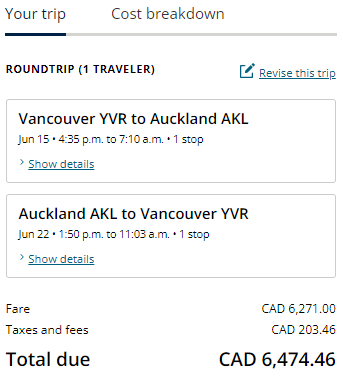 Fly at other times and pay double or triple.

Every program charges a different price. Pick your preferred payment option and book the flash deal before it vanishes.

One of FCF’s many strategy inventions: Buy miles or points to use for the flash availability deal. Learn More.

Click on “Policy Details” to check what is the risk of booking for one of these airlines.

Sign up now and travel first class for less.

Everybody knows how frequently airfares change (some estimates claim that there are up to 500,000 fare changes daily). Because that’s a few too many for First Class Flyer to keep up with, FCF cannot guarantee that all fares discussed will be available when you go to make a booking. Also, for the sake of quick and easy “executive summary” format, all fare rules and restrictions can’t possibly be included. Fares quoted usually include the average taxes and fees for the routes in the chart.

Send to a Friend